Veterinarian Dr.Tiffany Major of Craig Road Animal Hospital discusses an often fatal infection, pyometra. It is most common in older female dogs that have not been spayed though it can occur in spayed dogs as well. This the story of Blueberry, a female pit bull living in North West Las Vegas. 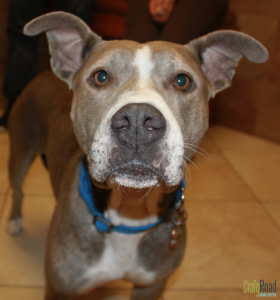 Blueberry’s parents started to notice she wasn’t acting herself. She was very lethargic, and laying down a lot. They knew something was wrong, but when they couldn’t find anything, they started to worry. Due to her rapidly changing behavior, they decided to bring her to Craig Road for a check-up.

When I met them in the exam room, I asked them about her clinical signs. They told me that Blueberry was having trouble with her hind legs giving out on her, and that she wasn’t as active as she normally is. Also that Blueberry, who was housetrained, suddenly started urinating all around the house uncontrollably.

That was when I asked if Blueberry was spayed, and they told me she wasn’t.

I suspected she had a pyometra but I wanted to be sure. This is a very nasty infection of the uterus, and if left untreated, is usually fatal. Pyometra is something that all unspayed, female dogs are susceptible to and even with aggressive treatment, can still be fatal.

A pyometra typically follows a dog’s most recent heat cycle. When the animal is going through heat (estrus), white blood cells are blocked from entering the uterus, so that sperm can enter without being attacked. White blood cells usually prevent infections. After a heat cycle has ended, the uterus walls thicken and the progesterone hormone levels elevate to prepare the body for pregnancy and fetal development. When the dog has several of these cycles without becoming pregnant, the uterine wall continues to thicken until cysts start to form. These cysts then start to secrete fluid and becomes the ideal environment for bacteria.

While a pyometra can happen to any intact female dog at any age, the infection is most common in older females.

X-rays were recommended, to diagnose this potentially deadly infection. When I looked at Blueberry’ x-rays, the uterus was engorged as if the dog was pregnant. However, these were not puppies, the uterus was completely filled with pus. It was clear that Blueberry had a pyometra. I let her parents know that the best option was to have surgery right away to remove her uterus, or this infection was likely to be fatal. 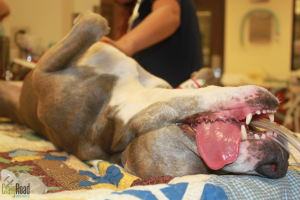 We immediately prepped Blueberry for surgery. The removal of the infected uterus is a similar procedure as a regular spay, but with the added complication of a major whole body infection, risk of rupturing the uterus, increased risk of hemorrahage, and a much more complex recovery. After the infected uterus was removed, it was weighed and found to be four pounds! Other patients have been found to have infected uteri up to 10 pounds!! 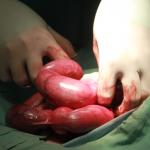 Removal of the pyometra.

There are two forms of pyometra, open and closed. Blueberry was experiencing a closed pyometra, which is the more deadly form because the pus cannot drain from the body. Pus then builds up within the uterus, causing the abdomen to swell, and eventually the uterus to rupture, killing the patient. Blueberry wasn’t getting up because her uterus was so enlarged that it caused discomfort while moving. Blueberry was lethargic due to the toxins that build up from the infection. She was drinking a lot of water in attempts to flush the infection out of her body. Both of which, leads to the inappropriate urinating around the house.

In an open pyometra, the infection within the uterus is able to drain from the body, resulting in the dog having a foul smelling, vaginal discharge. More often than not, even if the pet has an open pyometra, it quickly turns into a closed pyometra. Either way, chances of a pet surviving an open or closed infection are extremely low without aggressive treatment. 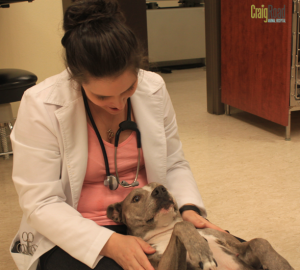 Because Blueberry’s parents were so in tune to their dog’s behavior, they were able to notice something was wrong right away, and seek appropriate medical advice. It was for this reason they were able to catch the infection early on. Blueberry’s chances of surviving the surgery was much higher than if they had waited. 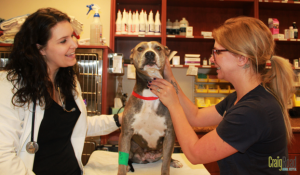 We are so happy to see you better, Blueberry!

Blueberry’s procedure went very well, with no major complications. She made a full recovery and a few days post-surgery, was able to go home. Her parents are so happy to have their healthy baby girl back to normal. It was great to see her back to her usual self!

***WARNING*** The image below may be disturbing to viewer

This is what was inside Blueberry’s pyometra and making her ill.