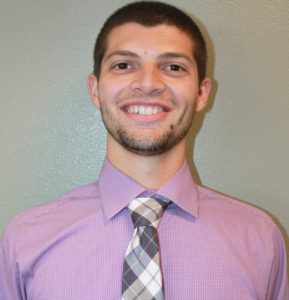 Mike was drawn to Animal Medicine in high school through his love of animals, math, and science.Toward the end of High school, he began shadowing at local clinics. “I think I always knew that I would end up doing something with animals, “he says, “I loved shadowing and I knew then that this was what I wanted to do.”

Mike comes to Craig Road Animal Hospital from Darion, Illinois. He obtained his Bachelor’s degree in biology at Augustana College in Rock Island Illinois. He is currently pursuing his Doctorate of Veterinary Medicine at The University of Illinois in Urbana-Champagne. He is interested in general practice and is open to learning all aspects of animal medicine. Mike is hoping to view a variety of surgeries and observe the business aspect of the hospital as he hopes to open a clinic in the future.

Away from work, Mike is very active. He enjoys athletics, especially running 5K & 10K marathons back home. “The last race I participated in was the Illinois Marathon 5K and I’m working up to a half-marathon before graduation,” he says. Mike has a three-year-old Pitbull mix rescue named Donnie who runs with him and he says, that it’s what keeps him going.