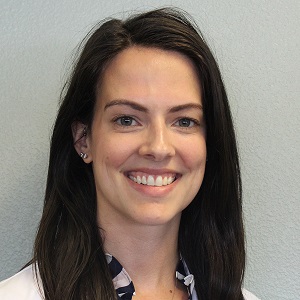 Allie grew up in Winston-Salem in North Carolina. However, realizing that she wanted to be a vet took a while; “. I was not the five-year-old who knew she wanted to be a vet when she grew up,” says Allie. “I didn’t take the standard route.”
Although not sure of what she wanted for a career, Allie always had pets growing up and also got involved in local animal rescues. “In high school I was a gold award girl scout,” says Allie. “I helped one of the local rescues by raising donations and my mom is very involved in rescues.”

Allie went to Furman University in South Carolina for her bachelor’s degree; however, it was not until her senior year that she discovered her passion: “I was drawn to the challenge and to working with animals and people,” says Allie. “Once I realized that was what I wanted to do, it really made sense. It was like my resume had been working towards that my whole life. I was just doing what I enjoyed.”

After graduating from college, Allie worked in a veterinary office as a kennel tech and then as a veterinary assistant. She was accepted into North Carolina State University and under took a dual MBA and DVM degree program. She is currently in her final year of her doctorate of veterinary medicine.

Allie is particularly interested in acupuncture, dermatology, and imaging. In her spare time, Allie like to spend time with her mixed breed mutt called Barnaby.