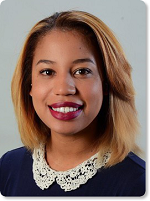 Craig Road Animal Hospital’s very own Marketing Manager Tianna Winters shadowed Dr. Shane Murphy during one of his shifts to get a feel of how the hospital runs and its culture. Below is the second addition of her personal account of what it’s like to be a veterinarian in North West Las Vegas.

3:20 p.m. – After Dr. Murphy makes sure the Border Collie was comfortably waiting in a kennel, he checks on the Pit Bull mix with the mass between his toes. The friendly dog that greeted us in the room earlier has been replaced with an uncooperative bulldozer. “Dr. Murphy room six.” With the help of three Veterinary Technicians, Dr. Murphy is able to retrieve the needed samples.

3:50 p.m. – Dr. Murphy goes into room six. He currently has two dogs in the treatment area and three exam rooms he is working between. Exam room six has a lethargic cat that has had one bite of food in the past four days. Exam room three has a very sick puppy that looks like she may have contracted Parvovirus, a common and potentially fatal viral disease in dogs, and exam room eight has a three-year-old Golden Retriever that ate his owner’s birth control pills.

I decided to take this opportunity to chat with a few of the other doctors while Dr. Murphy tends to his many rooms, as I felt I was slowing him down. I laugh when I remember how worried I was when coming up with ideas of what to talk about during “down time”. I was able to talk to the five other doctors on the floor who were also busy prepping for surgeries, giving vaccines, and analyzing blood work. There are only eight exam rooms, but this place is busy! Besides the appointments, there are walk-ins that are coming in as well. I ask if this is normal and was told that this is just a typical day at Craig Road. The hospital caters to an average of 150 to 200 pets per day and one doctor can attend up to 20 to 30 rooms each shift.

4:30 p.m. – Dr. Christopher Roberts offers to take a look at the blood samples from the Pit Bull with the mass for Dr. Murphy while he attended to his other rooms.

The process for the samples is a long one. First the sample must be dyed so that the different cells are readable. After the dye dries, they can be viewed. All in all, the process takes about 15 to 20 minutes and if the sample isn’t readable, the process starts all over again. The third sample was the winner.

5:10 p.m. – Dr. Roberts deciphered the cells…it looks like cancer. He calls over Dr. Murphy to take a look at the slide. Dr. Murphy agrees but wants to send it to the outside reference lab for a confirmation. 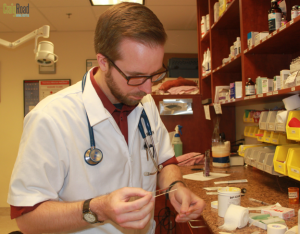 5:30 p.m. – Dr. Murphy makes a few calls to update owners on their pets. The lethargic cat is being held overnight so that tests can be performed and treatments started. The puppy does have Parvo and is placed in isolation for aggressive treatment and the exam room is sanitized. The Golden Retriever is given an injection that makes him vomit. And then an emergency comes in and it’s given to Dr. Murphy.

6:00 p.m. – A brown, mixed breed dog, is brought in with three BB-gun shots between her torso and abdomen. She was in her front yard before being shot by an unknown assailant. The poor dog is groaning and barely moving. It doesn’t look good. The dog is 10-years-old. An ultrasound is performed and there is fluid in her abdomen. Surgery will need to be performed to evaluate the full extent of the damage. But even with surgery, the dog may not make it. “These are the discussions I never get used to having,” says Dr. Murphy before he walks out of treatment.

6:45 p.m. – The parents tearfully request to have their dog euthanized.

Yes, I got a little teary eyed. I needed to take a break.

Next week: Another emergency that leads to surgery and puppies! Stay tuned!