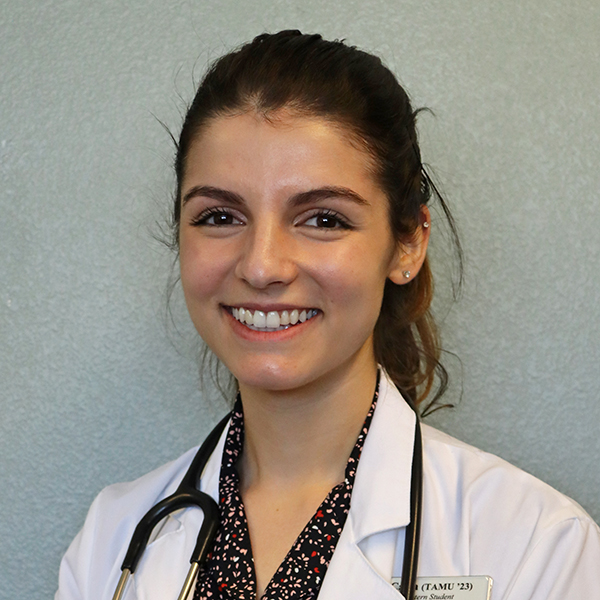 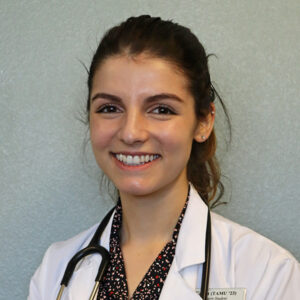 Carla is from Houston, Texas, and is currently a third-year veterinary medical student from Texas A&M University. She’ll graduate in 2023. According to Carla, her interest in working in animal medicine started when she was little. She said she always had pets growing up, and that her first pet was a cat named Kicky. As she got older, Carla began shadowing at different vet clinics as a kennel tech.

“I just grew really passionate for the whole field and what the job of a veterinarian encompasses,” Carla said. “It’s more than just caring for the animal, but that client relationship you develop, I wanted to have that as well as the connection to animals, so that became really big for me.”

Carla also attended A&M for her Bachelors in Wildlife and Fisheries Sciences. She graduated a semester early and worked at the Texas A&M Veterinary Medical Diagnostic Laboratory in Bacteriology. A lot of her volunteer experience is in shelter work, but Carla has also volunteered with a women’s organization that helped women in shelters, held etiquette classes, and discussed common issues in the workplace.

She said she heard about the externship program at Craig Road during a virtual career fair Texas A&M hosted. Her family is also relocating to Reno, which made her more interested in externing in Las Vegas. Carla said she’s eager to gain more hands-on experience with her externship, as well as developing strong relationships with her mentors at Craig Road.

In her spare time, Carla enjoys jogging and yoga to stay active. She also enjoys hanging out with her family and friends, and indulging in the occasional shopping spree. She has two cats, a Domestic Shorthair named Jean Claude and a Bengal cat named Cleo.

Welcome to the team, Carla!