Three legged pets, affectionately know as tripods in veterinary world, do very well post surgery. However, it is not always necessary for the vet to remove all of an affected limb. This raises the possibility of a prosthesis. Craig Road Animal Hospital’s own Dr. Jacqueline Parker discusses, and shows, how we go about fitting a dog for a prosthetic limb here in North West Las Vegas! In part one, we saw the process of taking a mold for the prosthesis. In part two, Earl gets his new artificial limb! 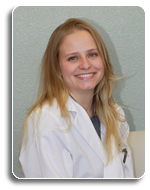 Earl’s new prosthesis arrived at Craig Road and there was lot of excitement about fitting it to Earl. The normally frenetic organized chaos of our treatment area ground to a halt while Earl tried out his new leg. 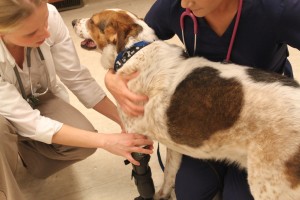 Earl being fitted for his prosthesis.

The prosthesis attaches to Earl via sliding over his leg and snuggle attaching to a slip cover; which allows it to be secure and not move which might cause rubbing, but not be as tight to cut off circulation. 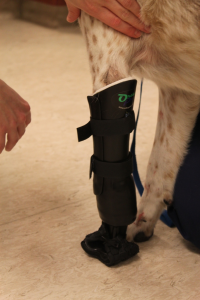 Earl was initially unsure. He had been managing just fine for so long on three legs that he did not know quite what to make of suddenly having a foreign fourth leg. This is a normal part of the process however, and I was convinced that with some exercises, training, and time, Earl will be back to a four limb fully functional pooch. 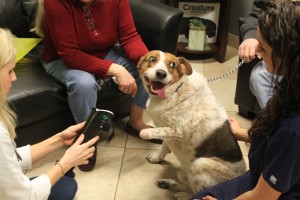 The next stage was to train Earl’s owners on how to fit the prosthesis and how to work with Earl over the coming weeks to get him used to his new limb. Earl’s owners were comfortable with the time and types of training Earl would need at home to adjust to his new prosthetic limb. 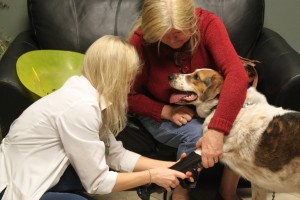 Showing mom and dad how to fit the prosthesis.

Typically with prosthetic limbs that animal needs a couple of weeks to adjust to the new limb and use it appropriately. Using the limb for a few hours a couple of times a day is ideal to teach pets like Earl that the limb is beneficial, regain strength in the muscles of the affected limb, and prevent any pressure soars from occurring. 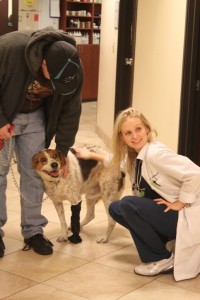 We rechecked Earl 4 weeks later to make sure that everything was going smoothly. As part of the ongoing process some adjustments were needed to the prosthetic that had to be made at Othopets however a few weeks later and Earl had his final new leg. Looking good Earl!

Prosthetics are not for every pet with a missing limb, or even every owner. However, with certain types of amputations they are an option to turn tripod pets back into quadrupeds or with pets that have debilitating or permanent limb injuries.

We’d be happy to discuss the process, and to evaluate your pet when you next come in to Craig Road Animal Hospital.