FacebookTwitter
Blog, Pet of the Month
No Comments

Sara was making her normal rounds on the farm when she stumbled across a brown heap of fur. “He was just curled up into a little ball, and you can tell that he was starved, just skin and bones,” she said. Sara remembers how it was easy to tell he had been out here for some time. When she offered him some water, he slowly uncurled and cautiously walked towards her. That’s when she noticed his injury. “His leg looked like it was completely crushed, it was just limp and bent the wrong way,” Sara said. 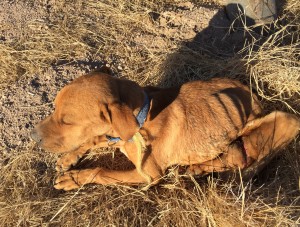 This is how Bill was found. He was malnourished and sitting on top of his damaged leg.

She called over one of the field hands to help her pick Bill up and carry him back to the farm. “We all discussed what we wanted to do,” she said. “We knew that the leg was going to have to be amputated because it just looked terrible.” Sara and a few of her coworkers take their pets to Craig Road Animal Hospital which is how we came to know the story of Bill. “We saw Bill right away and decided the best thing we could do was to amputate the leg,” said Katherine Ballor, DVM who saw Bill that day. “We took x-rays to check for internal injuries, we ran blood to check the internal organs, and ran a fecal test to check for parasites,” Dr. Ballor said. “Bill was malnourished, had parasites, and a severely injured leg. The poor guy had it rough.”

Bill lounging in his new home.

After a successful surgery, Dr. Ballor wrapped Bill up and sent him home. A few days later Bill came in for a check-up and the difference was night and day. “The timid, emaciated dog that came in for an emergency turned out to be a playful, affectionate pup,” Dr. Ballor said. “He even started to gain some weight and was already well accustomed to getting around on three legs. He was a completely different dog.” Our entire staff fell in love with Bill the moment he came through our doors. We could not put into words the feeling we had to see him walking around like a normal, lovable dog. And Sara said he’s flourishing at home. “He runs and plays all over the place. He is also starting to understand commands,” she said. 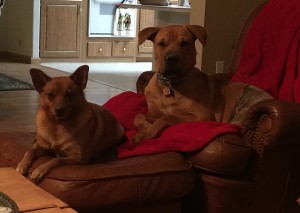 Bill with his new roommate and friend Whiskey, a Shibu Inu mix.

He is also a bit of a guard dog, letting any unfamiliar face know that this is his pack…or at least until Sara tells him to back off. “Overall, he’s just a big teddy bear,” she said. “We all love him on the ranch, he’s our mascot.” His love for his mother definitely shines through. Anywhere she goes, Bill is close by. Her favorite story to share is how affectionate Bill is. He sleeps in his own bed next to hers and throughout the night, Bill lifts his head onto the side of her bed, just to let her know that he’s there. Congratulations Bill, you are our March Pet of the Month!