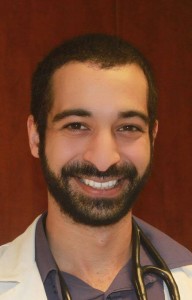 Sammy is a veterinary student visiting Craig Road Animal Hospital from the University of Missouri. He originally thought he wanted to get into dentistry or human medicine until a personal experience changed his mind.

“My dog was severely attacked by a coyote my freshman year of college,” Sammy said. “We all thought we had to say our good-bye’s but the doctor placed him into surgery right away and saved him.” He said the moment he saw his pup running around and playing the next day as if nothing happened was when he realized saving animals was what he wanted to do with his life.

“As I progressed in my studies and through the hands on experience I learned just how much I love this industry,” he said. “You get the satisfaction of treating the patient and then seeing the smile on the client’s face when they’re reunited.”

After he graduates, Sammy would like to move back to L.A. where he can practice small animal medicine. Sammy says that his ultimate goal is to have his own practice. Thanks for choosing to learn from our hospital, we are so happy to have you here!