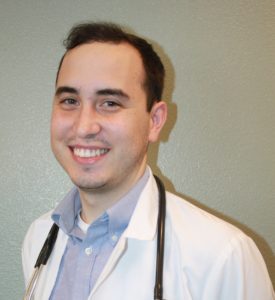 Meet Mathew! The New Orleans native is the latest to join our externship program. He is currently in his fourth year studying to become a doctor of veterinary medicine at Louisiana State University.

“I’m hoping to get a better understanding of how a general practice hospital works,” said Mathew of his time at Craig Road Animal Hospital, “ and looking forward to getting more hands-on experience.”

The fourth year D.V.M candidate has always had a love for animals. In middle school, he entertained the idea of becoming a lawyer. “I can’t argue with people,” he says, “so I decided to study veterinary medicine”.

Mathew grew up with pets. His first was a Dalmatian named Mannford and after he also had a golden retriever and a Labrador. Back home in Louisiana, Mathew has a Border Collie named Remy. In his downtime, he likes to binge watch Netflix, and HBO’s Game of Thrones.