FacebookTwitter
Behind the scenes, Blog, Externship, Veterinarians
No Comments 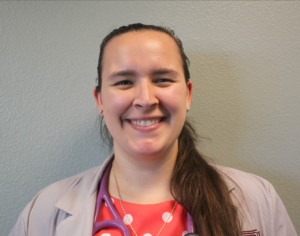 Kaitlin is originally from West Virginia. She earned her bachelor’s degree from West Virginia University, where she majored in animal and nutritional sciences.  She is currently in her fourth year studying veterinary medicine at Mississippi State University.

Kaitlin became interested in animal medicine after an undergraduate career assessment determined that Veterinary medicine would be a potential career for her to pursue. She then went on to volunteer at local animal hospitals and spent time as an Animal Care Intern at the West Virginia Zoo.

Kaitlin says she’s never experienced a small animal practice like Craig Road Animal Hospital. When asked what she hopes to learn during her externship with us, Kaitlin replied, “I hope to learn how a practice of this magnitude, that’s still a small animal hospital, runs efficiently and how it can be successful.”