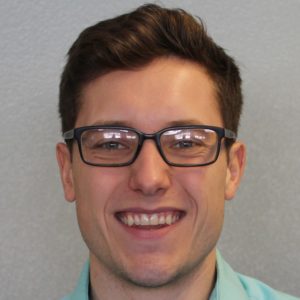 Growing up in Madison, Wisconsin, Cal always had an interest in animal care, but it wasn’t until his junior year of college that he decided to make the switch from human medicine, to animal medicine.  Cal explains that it was after spending time with some ‘really cool’ veterinarians, that he knew he wanted to become ‘that person’.

Cal attended the University of Wisconsin School of Veterinary Medicine for his undergrad, and where he is currently in his fourth year completing his doctorate of veterinary medicine.  He states that improving the quality of life for pets, and extending the life of pets for pet owners, is the most rewarding part of his job.

Although Cal had multiple dogs growing up, he had but one cat, ‘DC’, and for 22 years!  ‘DC’ would stand for ‘Darn Cat’, named after the 1965 thriller/crime drama ‘That Darn Cat!’, one of Cal’s favorite movies.  It’s no surprise that Cal describes himself as light-hearted and outgoing, much like his family Labradors.  In his spare time, Cal enjoys collecting vinyl records, hiking, and downhill skiing.