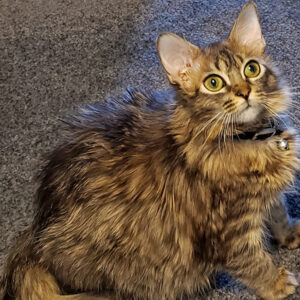 Our Pet of the Month for November is Gremlin – a runt of the litter who has overcome many obstacles before finding his forever home.

According to Gremlin’s owner, he was born into deplorable conditions. Aside from being the runt of the litter, Gremlin also had worms, ear mites, ringworm, and was found abandoned in a cardboard box.

“As if that wasn’t bad enough, the foster home he was placed into had eight other cats and he constantly had to fight for his food,” Gremlin’s owner said. “When we brought him home, he would not really play very much. He had bald patches from the ringworm and the rest of his coat was dull.”

Gremlin’s new owners brought him to Craig Road Animal Hospital where he was treated by Dr. Finder. She put Gremlin on ear drops for the mites and dewormer.

“Unfortunately once the mites were gone, he developed a bacterial infection in his ears and had to – again – have drops put into his ears,” his owner said. “His ears are better than ever now thanks to the awesome doctors at Craig Road. He was getting bullied by his bigger sister, so we started him on Rocky-like training sessions so he would get stronger.”

Gremlin has gotten a little pudgier, and he always comes running to his workout area whenever he hears the Rocky theme song! Since finding his forever home, some of Gremlin’s favorite things to do is hide in his owner’s silk plants, pounce on his sister, and steal his sister’s collar and run around the house with it.

“He is a healthy little boy with a beautiful long coat that plays all the time like a normal kitten,” Gremlin’s owner said. “I am eternally grateful to Dr. Finder, Dr. Tampira, and all incredibly caring and competent staff who have helped my little Gremlin finally become the lively kitten he should have always been.”