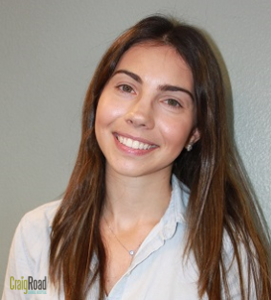 Kimberly joins Craig Road Animal Hospital as a participant in our externship program. She attended The University of Rhode Island where she received her bachelor’s degree in Animal Science, she is currently pursuing her D.V.M. at Mississippi State University.

It was in her preschool class, at three-years-old, that she decided that she wanted to be a Veterinarian. “I really like medicine, the study of science and the body, but I really want to work with animals because I have a sweet spot for kittens” Kimberly grew up with a tabby cat named Thomasina, that she looked after for 18 years.

Kimberly heard about what a fantastic opportunity the Craig Road Animal Hospital externship program was, she decided to apply. After working as a Vet-Tech for a few years she wants to become more comfortable performing Doctor tasks. Kimberly is undecided on the career path after graduation. “I’m going back and forth as to whether I’d like to do an internship, or work in an establish practice, after school but I have plenty of time to decide.”

In her downtime, Kimberly loves cooking, kayaking and traveling overseas. In college, she explored Austria, Italy, Ireland, and is hoping to travel more after graduating. She currently looks after a cat named Morgan and Chinchilla named Boomer.