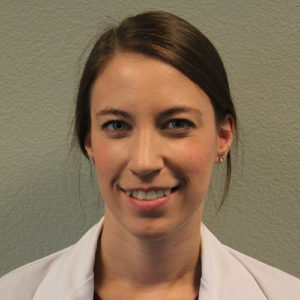 Omega grew up in Hot Springs, Arkansas. She has always loved animals. Omega began her path toward becoming a veterinarian in her senior year of high school. She took a tour at the University of Arkansas, she fell in love with the Animal Science department of study. She attended her undergrad at the University of Arkansas, with a major in Animal Science. Currently, she attends Louisiana State University in Baton Rouge, for her doctorate of veterinary medicine. She enjoys giving the client piece of mind when it comes to the medical health of their animal.

Our hospital administrator, Mike Falconer, spoke at Louisiana State University during Courtney’s second year of veterinary school. Thereafter, the externship program at Craig Road Animal Hospital became of interest. She was encouraged by the experience she could gain from the many doctors at a busy practice. She is also excited to work in the surgical suite, radiology, and our in-house laboratory. She believes having the tools to diagnose the patient as fast as possible is key.

Omega is a proud mother of a brown tabby named Annabelle, and a black Labrador named Otis. When she has time to relax Omega prefers to be a homebody. Her interests include; reading, cross stitching, spending time with her fiancé, and trying new foods.

We are proud to welcome Omega to Craig Road Animal Hospital!