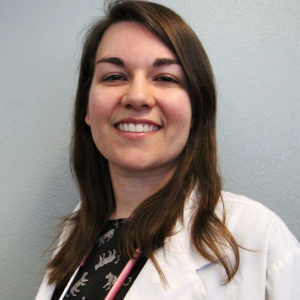 Marybeth is the newest extern at Craig Road Animal Hospital!

Growing up in Eastern Pennsylvania, Marybeth considered a career in zoology, but ultimately changed her mind when she realized there weren’t many job opportunities. She then entered Wilson College in her home state to study Veterinary Medical Technology, a little unsure of her next career steps. To her surprise, she loved the program!

“I loved drawing blood, I loved the science part of it, and then after I was a tech for a year, I decided to further my career,” Marybeth said. After graduating from Wilson, she entered the DVM program at Ohio State University. Currently, she is a fourth-year student.

Before attending Wilson, Marybeth volunteered at a local zoo where she helped with “diet preparation.” While at Ohio State, she has been volunteering at an equine blood volunteer program, working with blood donor horses and making sure the animals are well taken care of. Marybeth has also volunteered at various farms through the DVM program at Ohio State.

She loves exotics and would love to work with birds and other exotic pets. Marybeth said she also enjoys working ultrasound and dental. She said she learned about the externship program at a career fair and is eager to learn about how larger animal hospitals operate.

“I never worked at a GP that was this large, and I’m interested to see how it runs,” Marybeth said. “It sounds like it’s really well organized.”

In her spare time, she enjoys watching Netflix, playing tennis, baking, and cooking for others. She has three cats, including two Calicos, named Belle, TJ, and Luthien.

Welcome to the team, Marybeth!