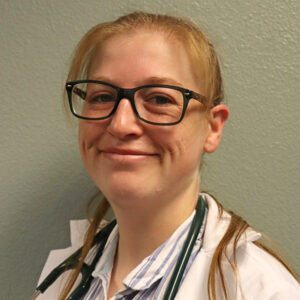 Julia is a fourth-year veterinary medical student from North Carolina State University and will graduate in 2022. She’s originally from Vanceboro, North Carolina but relocated to Raleigh for veterinary school. Growing up, Julia had a farm variety of animals, including horses, dogs, cats, chickens, ducks, and even a cow at one point.

Julia said she hadn’t considered a career in animal medicine until she started college at East Caroline University. She said she planned on joining the Army and wanted to work with people with special disabilities, primarily in recreational therapy in horseback and therapeutic riding. Julia said she would help the veterinarians that came in to check on the horses and always thought it was interesting that veterinarians could provide a voice for the animals and the care they needed.

She had been attending East Carolina University for her Bachelor’s degree but decided to transfer to North Carolina State’s Animal Science program. Julia said she fell in love with the program and decided to pursue animal medicine for her career. Some of Julia’s volunteer experience includes working with animal shelters and the Special Olympics.

Julia said she initially heard about the externship program at Craig Road from a student ambassador for the veterinary school. The hospital administrator for Craig Road gave a virtual talk about the program, which encouraged Julia to apply. She said she’s looking forward to how animal care differs in Las Vegas compared to North Carolina. Julia said she’s also excited to visit Las Vegas for the first time.

“Flea, ticks, and mosquitoes are half of our general practice conversations with all of our clients in North Carolina, but out here it’s not a thing,” Julia said. “So, it’s differences like that that I’m really interested in because it’s important know, especially if people are traveling with their pets.”

In her spare time, Julia enjoys all kinds of outdoor activities like hiking, fishing, and kayaking. She has several pets of her own: a Great Dane named Scarlet, a Pitbull-mix named Rudy, a Domestic Shorthair cat named Miss Kitty, and a gecko named Gerald.

Welcome to the team, Julia!