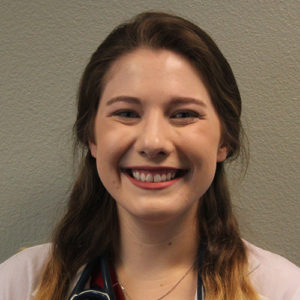 Courtney is from just outside New Orleans, Louisiana. She knew she wanted to work in animal care since the first grade. She attended a “First Grade Grows Up Day”, where she went to school, in scrubs, posing as a veterinarian. Her mother claims Courtney made the decision that day and never looked back. She graduated from Auburn University, in Alabama, with a major in Zoology, for her undergraduate degree. She currently attends Louisiana State University School of Veterinary Medicine. Her goal in the veterinary field is to strengthen the animal and human bond.

Courtney chose the Craig Road Animal Hospital externship program because it grants her opportunity to work with a number of doctors. She wants to absorb and learn from a big practice in the month she has here. She loves that Craig Road has a large number of clients to work with and educate on a daily basis. She hopes to build strong client relationships, and prevent conditions in her patients. She also looks forward to brushing up on her pet dentistry while here.

Courtney is a mother to a Labrador and golden retriever mix named Calypso. Calypso is a rescue from a flood in Baton Rouge. This canine has an eye patch and is named after a voodoo pirate from the film Pirates of the Caribbean. Between her studies, Courtney enjoys cooking new recipes, going to the gym, and taking her dog hiking on the weekends.