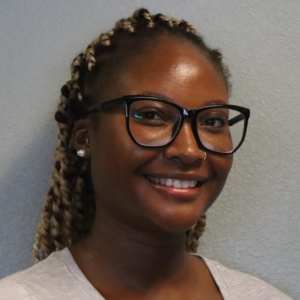 Brianna is originally from Houston, TX and is currently enrolled at Tuskegee University in Alabama where she will be graduating in 2023. She received her undergraduate degree from Texas A&M University but chose to continue her education at Tuskegee so that she could attend a smaller university.

Brianna has two pets, a dog named Fluffy, and a cat that she cares for named Button. Growing up, her family always had dogs in their home as well as parrots, fish, and turtles. From a young age, Brianna knew she wanted to be a veterinarian, “I have journal entries from when I was six years old where I said, ‘I want to be a veterinarian!’ she said.

Brianna found the Craig Road Animal Hospital externship program through another of our externs, Sydney, who also attends Tuskegee University. “It’s so hard to find a program that provides this level of support between the mentorship, housing, and stipend. It’s really reassuring to have a place that you can get experience as well as real world support,” she explained. One of the areas that Brianna particularly loves is working with exotics and she especially loves big cats and hopes to get opportunities to work with them in the future.

Outside of school and working with animals, Brianna loves to travel and was recently able to visit the island of Curaçao in the Caribbean. She is a foodie and enjoys trying the local cuisine everywhere she visits.